On August 18, 1667, Pastor Peter Rüedi delivered his first sermon in the new church of Bözen, even before it was consecrated and completely finished. A bailiff named Kaspar Amsler is said to have donated one of the new church bells. Unfortunately, there is no written evidence of this. But thanks to historical sources from the 17th century, which are slumbering in our archives, we are able to gain an insight into the life of Kaspar Amsler.

The Bernese Governor and the local bailiff

The rule of Bern was represented in this part of the country by the governor. He was a patrician and a representative of the Bernese aristocracy. His office was at the center of the entire Bernese administration. He governed the area of Schenkenberg with its approximately 5659 inhabitants (according to the census of 1771). In each of the 11 parishes or bailiwicks belonging to it, the bailiff was his local deputy.

According to the historian Max Baumann1) , the rank of bailiff was the highest office a common subject could achieve. He was elected by the Bernese Council, the legislative authority of the Bernese government. The office of bailiff was normally conferred for life. Since he advised the Bernese governor in difficult matters and represented him in case of absence or illness, the local bailiff possessed much influence and power. On the other hand, he stood between fellow citizens and the Bernese authorities, which occasionally brought him into conflicts of loyalty. The bailiffs were all from the rural upper class.

For the parish Bözen (url) with the villages Bözen, Effingen and Elfingen Kaspar Amsler was the local bailiff for 25 years from 1643 until his death in 1668.

The picture above shows the court of Bözberg at a lavish feast around 1566. The two similarly dressed men behind the table are probably the two bailiffs Simon Burger from Bözberg and Cunrat Herzog from Rein. Below the coat of arms of Schenkenberg.

Kaspar Amsler and his two marriages

On June 28th, 1624 Caspar Amsler married Verena Büchli. The couple baptized six children over the next 10 years: first Johannes in August 1625, then Heinrich, Anna, Ursula, Verena and in February 1635 another Verena. Very likely the young mother died giving birth to this girl.

Just one year later Kaspar Amsler married for the second time. On June 20th, 1636 he married Anni Vögtli. The two of them baptized four children: Margret, Heinrich, Jacob and Catrina.

Both marriages must have been to one and the same Kaspar Amsler. Of the two Amsler families living in Effingen at that time, only the family of Hans Amsler and Anna Falk (see above) baptized a boy named Kaspar.

Kaspar Amsler’s role as local bailiff also helps us with family research. After his death the name “bailiff’s son” appears in the Effingen court records for two sons of Kaspar. Both Hans from the first marriage and Jacob from the second marriage are mentioned as “bailiff’s son”.

The wedding of Kaspar and Anna was celebrated on July 10th, 1636 in the tavern “zur Glocke” in Effingen. The fact that there was dancing at this celebration unfortunately remained no secret and attracted the attention of the choir court.

On July 10th, 1636, 6 men and 7 women had to appear before the choir court. Among them was the innkeeper of the tavern in Effingen, the Gasthaus Glocke. They were accused of having danced at Kaspar Amsler’s wedding party. They confessed, asked for mercy and pledged to improve their ways. The fine was 6 guilders for the gentlemen and 10 shillings for the ladies.

Although the wrongdoers promised improvement, dancing was a common and very popular pleasure, especially among the younger villagers. Thus, over the years, repeat offenders could be found again and again. It was not until the first half of the 18th century that the Bernese ban on dancing of 1573 was relaxed.

On the occasion of a libel suit in August 1643 a witness had to be questioned. The following excerpt from the choir court manual shows that the questioning was carried out by Kaspar Amsler and Hanß Fuchs:

Thanks to this interrogation, we have proof that Kaspar Amsler was the local bailiff. This evidence shows that he held this office since at least 1643.

Two entries in the Schenkenberg accounting records give us clues about the life and death of Kaspar Amsler. At that time, a tax was due for each death. This tax had to be collected and delivered by the bailiff. Thanks to these records we know not only that Kaspar Amsler did indeed hold the office of bailiff, but also that he died between 1667 and 1668, probably due to the plague. In the Schenkenberg accounting records we find the following entry in 1667:

In summary, the entry states the debt for the deaths of 18 householders. The cause of death is the “wretched plague”. Bailiff Amsler from Effingen paid the sum in question. The outstanding fees for further deaths due to the “contagion” are to be settled in due course.

This entry confirms that Bailiff Brack from Effingen paid the outstanding taxes, which were not yet settled by the deceased Bailiff Amsler in the previous year.

Thus we know a little more about the raging plague and its numerous victims. Among them was our bailiff Kaspar Amsler, who died at the age of about 73. Between 1667 and 1668 his position was filled by the new bailiff Brack from Effingen.

Although the death records of the parish of Bözen are missing for this time, a list of 51 plague deaths was kept in the 2nd church register at around 1668. The aforementioned Kaspar Amsler is missing from this list and the number of victims was probably much higher.

Property in Bözen and Effingen

Another informative source of information is the Schenkenberg land register of 1625. In addition to listing all the estates subject to interest payment, their owners are also found here. In a supplement of 1652 it was recorded whether the ownership had changed.

In eight cases the change of ownership reads “Hans Amsler from Effingen, bailiff’s son”, similar to the following example:

Johannes (Hans) Amsler was the eldest son of Kaspar, he was born in 1625. He married Verena Brändli in 1647 and then died all too soon, probably already at the age of 32. Before his death he obviously came into a lot of land, both in Effingen and in Bözen.

These estates either came from his father or he was able to acquire them at a young age. Nothing else is known about him.

Bailiff Kaspar Amsler was the grandfather of “Bäldi Hans“, born in 1652, about whom we have a lot more information. His wife Anna Heuberger was also quite prominent in her younger years and had appeared several times before the choir court. 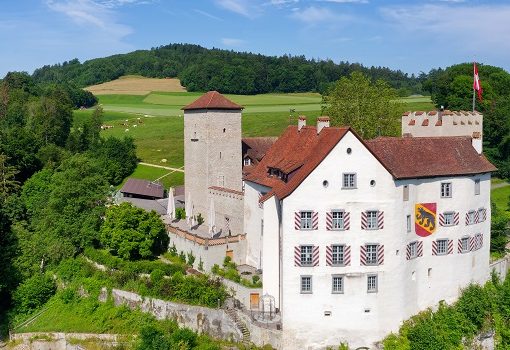 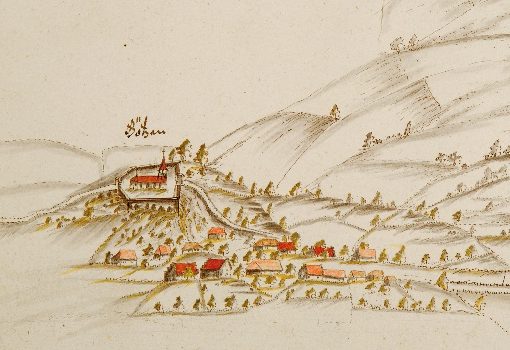 Over the years, the venerable “Kilchhöri” or parish of Elfingen evolved into the present-day parish of Bözen. Understanding this historical development is […]